Remediating Mold in a Horse Barn 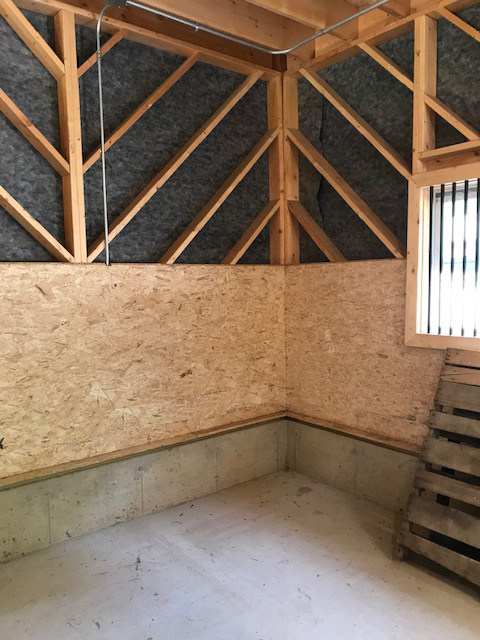 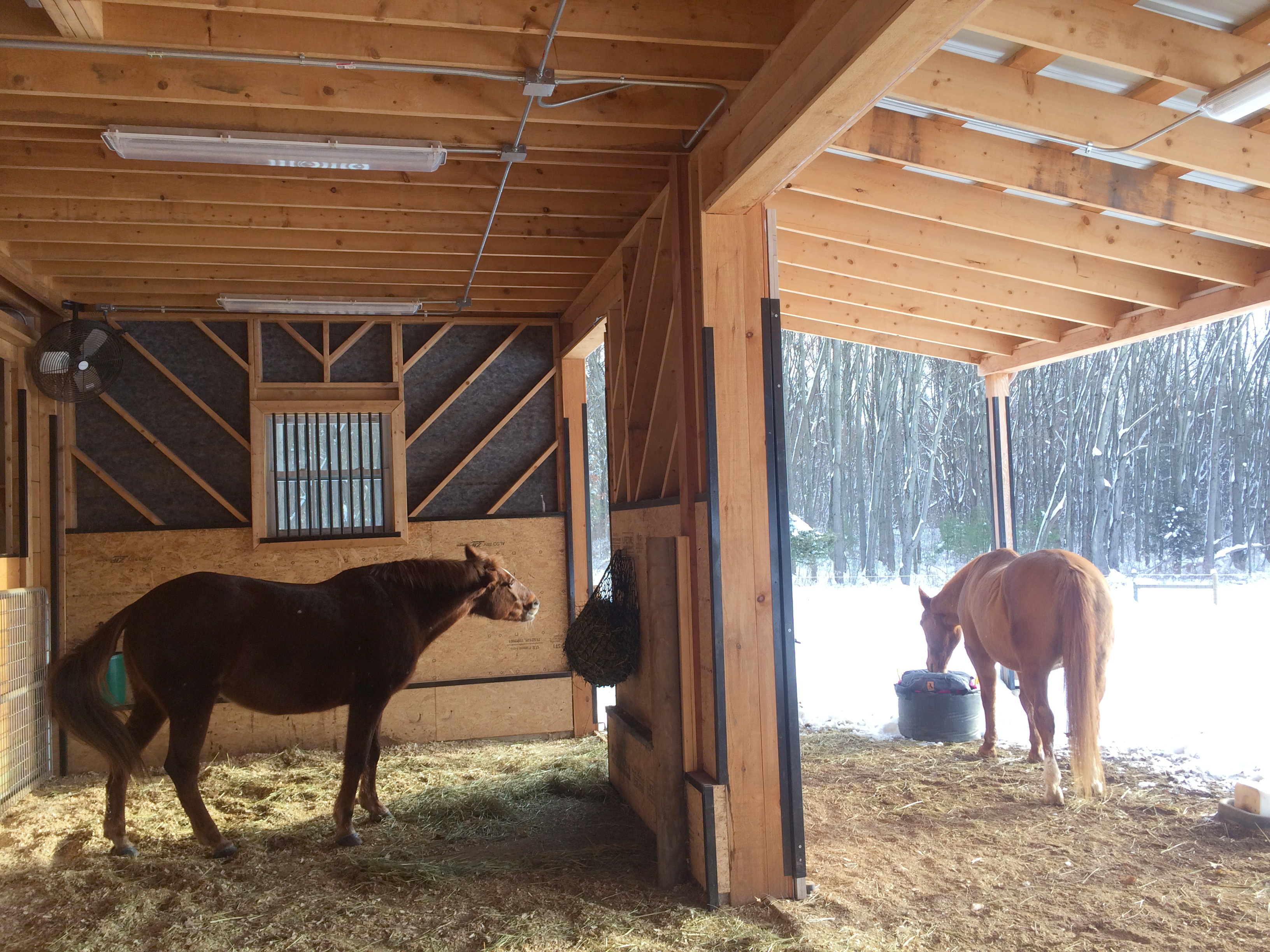 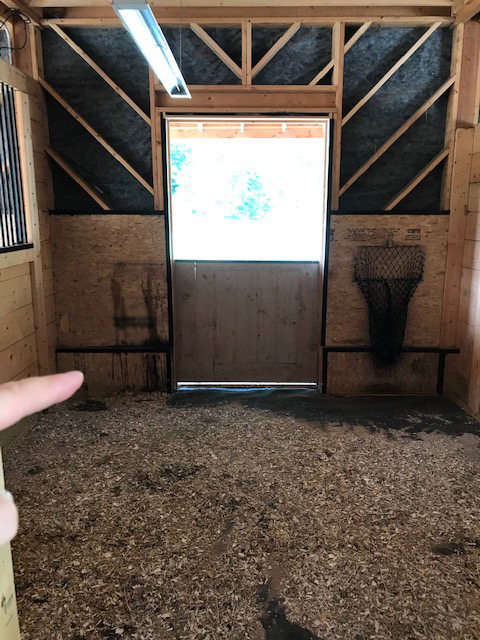 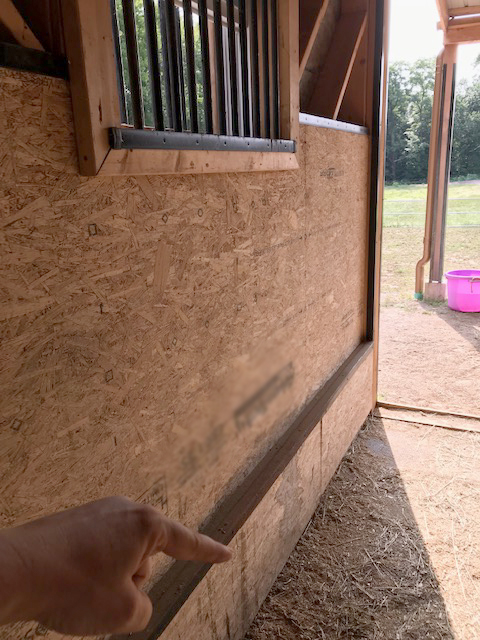 Note: We recently received this question from a follower of ours on Instagram. While this is NOT a Blackburn-designed barn, we felt that others might have similar problems, so we wanted to offer as much help as possible to this horse owner. Some of her photos are included in the post for clarity.

Q: Dear Blackburn: We recently built a backyard horse barn in western Massachusetts.  The timber frame style building is a hybrid run-in shed/horse barn, attached to a track-paddock with sacrifice areas and pastures.  The horses are turned out together 24/7 with run-ins, with option of separate stalls if needed for injury/weather.  This summer, after one year, we found mold in a few areas of the barn.  Since learning about Blackburn, we have been fans, and we seek insights on how to remedy our mold problem in a way that is safe for the horses and hay too.

The barn is 36’x36’ with a raised center aisle.  The south 1/3 of the building is a run-in with a packed dirt floor covered by rubber mats and shavings. The remaining 2/3 has a concrete pad and includes 2 stalls – one used as a horse stall and the other used to store hay.  The 11’ ceiling leads to a hayloft (most hay stored in a separate building) with an 18’x6’ cut-out in the middle of the floor, for both sunlight and ventilation.  Hayloft windows/door on all sides and an open eave towards the top also offer ventilation.  A frost wall surrounding the barn is approx. 1’-2’ above grade. Inside the barn, including the run-in and both stalls, the interior frost wall was covered with resin technology wood screwed directly into the concrete, primarily for safety reasons, to soften the impact if a horse kicks the wall/concrete.  We recently found black (and some white) mold between the frost wall and the resin technology wood.  We have removed the product and bleached the area, but how to proceed…

1- How can we safely cover the interior concrete frost wall within the horse areas (run-in, stalls, grooming aisle, hay stall) so that it has some “give” to prevent injury when a horse kicks it, but which won’t harbor or cause mold? We have considered covering the frost wall with rubber, or adding a vapor barrier and applying new product.

2- What do you recommend we do to the concrete floor and frost wall to store hay and avoid mold in the hay stall? There’s a 4” step down from the aisle (we realize that was a mistake since it traps moisture).  We put a high-quality insulated mat in the horse stall, but the concrete floor is bare in the hay stall.  We use the hay stall for hay now but want to have the option of keeping a horse in there in the future.  (We’ve previously stored hay on a double layer of pallets, plus floor covered by tarp, but with that set-up plus the wood product on the frost wall, the mold grew.)

A: Dear Fan: While I don’t know for sure what’s causing the mold in your barn, I feel the application of the wood product directly to the concrete frost wall without airspace behind it and near the floor where it is subject to moisture may be the primary problem.  I would suggest removing the wood product material at the frost wall and gluing rubber mats directly to the concrete frost wall to provide protection from horses injuring their legs by kicking the wall.  Provide an angle crib guard along the top edge to help prevent cribbing by horses.

I am not that familiar with the product you used, but I know it is an engineered wood product that has a wide range of uses.

The fact that the barn doubles as a stall and a run-in shed indicates that it generally remains open which is good as it allows air to circulate in and through the barn and reduces the health hazard that might be caused by the mold.

I found it odd to see diagonal framing in the walls between the post framing.  I’m unsure why that was done (maybe to provide horizontal bracing for the timber frame) but because the lower portion of the wall appears to be covered with the wood product it is possible air spaces between the diagonal wood framing trap air in some of the smaller spaces. That could add to the moisture build up. How the barn is maintained (i.e. washing down of the aisle and stalls), is handled could also contribute to the moisture problem.  It appears from your photos that most of the dark staining (mold growth) is along the low portion of the wall at the frost wall and that is probably more a problem of the wood product panels being directly attached to the frost wall than the diagonal framing.

Regarding the hay storage, you should always store hay off of bare concrete.  Using wood pallets is a good way to allow air to circulate around and under the hay.  Hay gives off heat as it cures and if not properly allowed to breath can actually ignite through spontaneous combustion and cause a fire.  Having the barn largely open as a run in shed is helpful but at a minimum the hay should not be stored on the concrete floor.  It should also be stored off the wall several inches to allow the air to circulate around it.  Placing a tarp on the concrete floor as mentioned will not serve any constructive purpose in my opinion and could just trap moisture below it.

BTW, I didn’t see any drains in your stalls?  How do you encourage water out of the stall where the slab is depressed 4 inches?

Incidentally, I noticed a door hook on one of the larger sliding doors at the run in portion of the barn.  That’s a potential hazard.  A horse could rub against the door jamb and the open hook could cause a significant injury.  I’ve seen it happen and it can easily be prevented.  Another type of latch should be used.  There are lots of options out there.

I hope this is helpful.