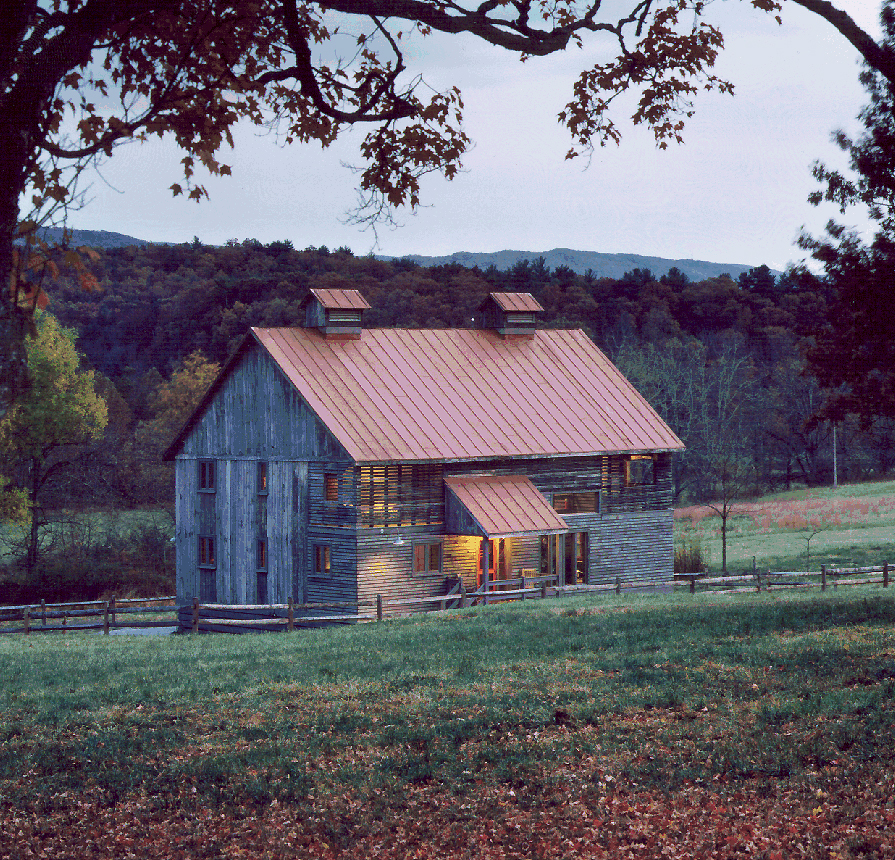 Blackburn Architects has been renovating old barns for nearly 40 years. That means that many photos of our projects circulate on social media, Pinterest, Houzz and other sites. Questions are a natural outcome. So, what are some of our recommendations for creating a home out of an old barn? We thought we’d ask John Blackburn for his thoughts.

John, what kind of barns work or don’t work for renovation into a home, generally?

“There is no one kind or type barn that works best, though many people gravitate towards old 19th century timber-framed bank barns. But there are many types of other old barns and they can make for wonderful houses – grand interior spaces with a lot of historic character. So, the type of barn really depends on your aesthetic and functional needs as well as the location.

“Barn architecture was influenced by the history and culture of the people that settled a particular area. For example: 1. Dutch and German barns in the mid-Atlantic region, 2. Connected barns in New England, 3. Tobacco barns in the south, or 4. Dairy barns which can be found in almost any region of the US. The ethnicity of the settlers, geographic location, the type crops or animals raised or used in farming.  All of these influenced the look, style and type barns that were constructed in an area.  And, of course, available building materials (i.e. stone, heavy timber, etc.) had a huge impact.

“Another little known fact that influenced the type and style of American barns was the circulation of the Old Farmer’s Almanac and other early farm periodicals.  These publications frequently included articles about different barn styles.

John, what to look for in barns to restore?

“There are a lot of factors to consider but the condition of the barn and the location are critical.

“The structural condition is one of the most important factors when considering transforming an old barn into a new use.  I recommend a structural inspection of the entire building before engaging in any remodeling or adaptation.  The structural damage could be obvious, i.e. missing, broken or rotted timbers, collapsing foundations or roofs, suitability of the structure to the load conditions of the new use, etc. Plumbness of the structure can give an indication of the structural soundness of the barn.  Obviously a leaning barn is not a good sign, but also look at the ridge of the roof.  Typically, a sagging ridge line indicates deterioration somewhere in the structure.  Sagging ridge lines can be due to a sagging ridge beam, a rotting timber column on the ground floor or collapsing foundation wall or almost any structural framing member above it.

“You will need to investigate for insect infestation, both current and past.  Powder post beetles can wreak havoc on the structure yet not be readily apparent to the novice homeowner.

John, what about the price of these transformations? Are they affordable?

“Price is always important, but even more so with a barn adaptation.  The structural stabilization could easily represent half the cost of the renovation though it depends on the condition of the barn (frame, siding, foundation, etc.) and what the owner wants to do with it.

“Another consideration regarding cost is the presence of hazardous materials, i.e. lead based paint.  Many old dairy barns were painted inside and out with lead based paint during the early to mid-part of the 20th century.  It can be expensive to either remove or encapsulate.  Another concern is asbestos shingles, often used on roofs and exterior walls of old barns, particularly dairy barns.

“The bottom line – go into a barn project with your eyes open. These conversions are not cheap, but they are enormously satisfying and hold their value well.

John, what are your thoughts on keeping the barn’s integrity as a farm building?

“What I hate to see more than anything short of tearing a barn down and “salvaging” the old timbers is inappropriate ‘glossing over.’ It’s about the worst end of life for an old barn (in my opinion).  When someone tries to make a residential building from an old barn but doesn’t respect its history or its contribution to the visual environment, I feel this is a lost opportunity.  For me, they are destroying the very characteristic that makes it attractive or romantic in the first place.  Far too often people say they love old barns but when they try to change its use and end up destroying it.  I would rather they leave the old barn for someone who appreciates the uniqueness of it and will give it new life.

John, what about “brightening” up the old interior by adding more glass?

“Sure, this can work in lots of ways. One is the installation of end wall windows as we did at River Farm but that’s not for everyone and is somewhat site specific.

Adding windows or sliding barn doors with glazed walls behind them is another way.  Because barns were a farmer’s industrial building it changed with the times and methods of farming.  Windows, sliding doors and additions were frequently added to modify farm structures to fit changing needs.  If [adding glass] is done in an architectural or historical way that continues the farm barn aesthetic, I think it should be acceptable.  But scale and size is important too.

“Another approach is possibly staining the old boards of the ceiling or walls with a semi-transparent stain. This provides some reflectance yet leaves the grain of the old wood in place. I’m against insulating a barn’s walls or the underside of the roof with drywall or some reclaimed old barn boards.  The problem with that is you lose the appearance of the massive heavy timbers, the framework of the walls, the purlins, the joinery, etc.  There is a better way.  We use SIPS panels on the exterior walls and roof. These provide superior R value without destroying the rustic interior look.  On the exterior, SIPS panels are secured to the timber frame and supported by a galvanized base angle.  Once complete and detailed properly, the building can look exactly like the former barn.  It works!

“Of course, electric lighting works too.  Other than possibly hanging an ornamental fixture, I typically recommend carefully placing a spot or some sort of theatrical type lighting on top of beams in specific areas. This will create minimal visual obstruction but can be trained down to a particular area, upward to reflect light off a ceiling, or across the space to an opposite wall.  Where and how you run the electrical conduits and placement of junction boxes requires careful thought.  I recommend not leaving that decision up to the electrician whose aesthetic sensitivity may not agree with the design goals. The same is true of HVAC systems.  A lot of thought needs to go into the type and location of HVAC systems and how ventilation and air movement within a large space can be comfortably distributed.”