Even though the 26th Annual Bark Ball for the Washington Humane Society (WHS) was June 8th, I wanted to share a little about this event because of its importance for the animals of DC and to us here in the office. Blackburn has been working with the DC WHS to find a suitable site and design a new shelter. While site selection is ongoing, the master plan was created in 2006. This year, our senior Project Architect, Daniel Blair, who has been with the firm for over eight years now, attended with his wife Ellie. As mentioned before, Dan and Ellie are very active volunteers in animal rescue. They volunteer for both the Washington Humane Society and HART in Virginia, and have rescued over forty dogs to date. I’ll let Dan take the rest of the story from here…

For those who are unfamiliar, the Washington Humane Society is one of the ten oldest Humane Societies in the US and was chartered by Congress in 1870. They run adoption, foster, educational, spray/neuter, and other related programs. In addition, they have always held the contract to provide animal control services for the District of Columbia – meaning they have to take in and care for every animal that is caught or turned in. This includes everything from gerbils, cats, and dogs to lizards, birds of prey, deer, and straight from the most recent headlines: pandas and bears.

For many years their facility was routinely underfunded and in such a poor state that it was difficult to attract potential adoptive parents. These operational difficulties contributed to the WHS’s kill rate exceeding 80%. Starting aroung 2005 with new leadership, the WHS adopted a 10-year plan to become a no-kill shelter. The most recent President and CEO of the WHS, Lisa LaFontaine, has not only continued this mission, but has expanded the organization to reconnect with the community and gain public awareness and support.

In the past year alone, the WHS cared for over 3,000 animals and was able to place over 2,500 into new homes. Within 7 years, the WHS has seen its kill rate plummet from a routine 80% to less than 20%. When you include the fact this was achieved during a slow economy – where there is an increase in animal volume – this is an astonishing feat.

However, in order to acheive their goal of becoming a no-kill shelter, fundraising is always important. This black-tie event for the WHS allowed guests to bring their canine companions (many fashioned in their own fancy clothing) as dates to a night of dinner, dancing, and silent and live auctions. With more than 820 guests and 400 dogs in attendance at the Washington Hilton, this year’s event made history by raising over $550,000, a new record for the WHS.

This is the fourth time that Ellie and I have been able to attend the Bark Ball with our girls, Heine and Frieda. Heine, the Cairn terrier in the photos and our WHS alum, was the first dog we adopted together. Due to poor socialization by her original owners, she was an absolute train wreck when we first got her. Let’s just say, she was so bad we applied for the Dog Whisperer show – and we always joke that we were denied because she was too much of a mess. We eventually found a great trainer that helped us rehabilitate her and she stills claims that Heine was the most difficult challenge she has ever faced.

We are both glad that we took a leap with Heine. She not only brings us a smile everyday when she greets us at the door, but she has also helped our trainer become annually recognized as one of the top trainers in the Washingtonian Best of DC magazine. More importantly though, Heine provided the spark that inspired us to foster and help rehabilitate other dogs in need. The Bark Ball was a great night to share stories with other foster families, volunteers, and animal enthusiasts, but it also was a fantastic evening to celebrate the positive impact this organization is having in the DC community. As an alumni, volunteer, and Architect for the Washington Humane Society’s Master Plan, it is an honor to be helping the WHS make a difference.

If you want to learn more about the WHS, please connect to the WHS Facebook page. 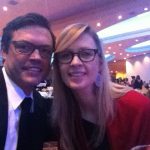 My wife and I attempting a selfie 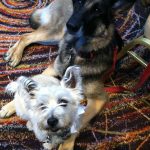 Our dogs Heine and Frieda 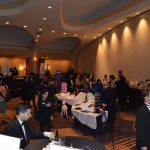 The silent auction and the irresistible doggie bar 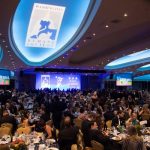 Over 800 people attended the dinner – the largest attendance ever 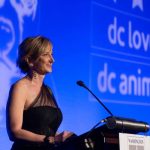 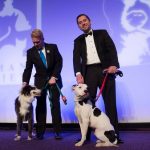 The star of the evening was Gary, who showed his talent in the video below.

Another video that premiered at the event spotlighted the services the WHS provides – but told through the story of a pitbull named Gary and his feline pal, Strawberry.  We’re happy to announce that after a couple months at the shelter, Gary found his forever family shortly after he starred in this video.

For more photos of the evening, please visit click here.

Some of my staff attended this year’s Walk for the Animals, an annual dog walk hosted by the Washington Humane Society. The walk encourages DC-area dog owners to take their dog (and themselves) for a stroll around one of DC’s neighborhoods to help raise awareness for the Humane Society.

With the weather in the low 90s on Saturday, I’m sure there was quite a bit of panting and lapping up water! Still, there were (doggie) rewards: vendor handouts such as ice cream and baked goods made especially for our four-legged friends.