On Saturday April 27th, Ian Kelly and I attended the Grand Opening of the Woodstock Equestrian Park in Beallsville, MD. Ian was the project manager for Blackburn Architects who was the lead designer for the renovated facility.  It was a fantastic day with perfect weather for the event.  The ceremonies included the dedication of the recently completed outdoor riding ring, beginner novice cross country course, and the stabilization and restoration of the historic Brewer Farm.

Blackburn Architects helped design the layout of the park and directed the restoration of the four historic structures. The Grand Opening event included a ribbon cutting ceremony, jumping demonstration by Bascule Farm, a polo match featuring the Capitol Polo Club, a demonstration of the new cross country course by the Seneca Valley Pony Club, and a presentation of the Maryland Horse Industry Board’s April Touch of Class award to Tracey Morgan.  I’ve posted some photos below of the highlights from the event. 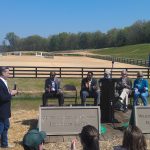 Aleco Bravo-Greenberg unveils new entrance signs for Woodstock Equestrian Park featuring the addition of Herman Greenberg’s name, his late father, who graciously donated the land for the purposes of an equestrian park. Aleco spoke on behalf of the Rickman and Greenberg family thanking everyone for their hard work and dedication to seeing the project to fruition. 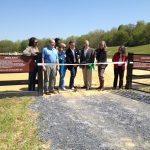 Aleco Bravo-Greenberg and Mary Bradford (director of Montgomery Parks) open the new outdoor riding rings to the public with the official ribbon cutting this past Saturday, April 27th. The ribbon cutting was followed by a jumping demonstration by Bascule Farm and a polo match by the Capitol Polo Club. 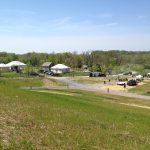 View of the newly renovated historic Brewer Farm complex from the stepped lawn seating along the side of the new 230′ x 350′ outdoor sand riding arena. Congratulation to MNCPPC and the parks department for a job well done! 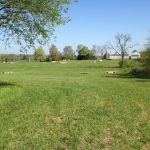 Once just a rolling pasture, Woodstock Equestrian Park now proudly hosts a brand new 6-acre beginner novice cross country course. Designed in collaboration with Blackburn Architects and McKee Carson Landscape Architects and constructed by Eric Bull of ETB Equine Construction, LLC, the Seneca Valley Pony Club were the first of many to test out and enjoy the new cross country course later in the day. 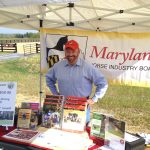 Ross Peddicord on duty at the Maryland Horse Industry Board’s tent during the grand opening ceremonies of Woodstock Equestrian Park. Ross was responsible of raising awareness of Maryland’s HIB. 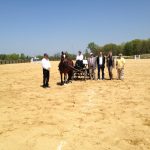 Honoring Tracey Morgan with a MHIB’s April Touch of Class award. Maryland resident Tracey Morgan, along with pony Fuego 88, won the 2013 USEF National Combined Driving Single Pony Championship! Congratulations Tracey and Fuego 88! Thanks to Ross for putting together such a nice presentation. 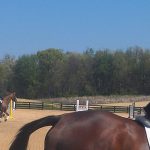 Riders queue while waiting their turn to try out the beautiful new jumping facility at Woodstock Equestrian Park. 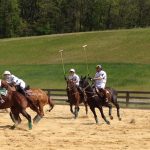 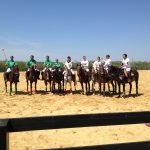 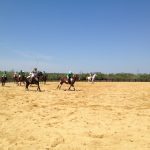