On November 10th, 2013, John Blackburn, once again, shared his book, Healthy Stables by Design with another group of horse enthusiasts at the Pebble Beach Equestrian Center in Pebble Beach, California. The facility offers over 30 miles of trials for hiking and horseback riding along the beach and through forests with guided tours, private and group rides, and lessons. Before the book signing, John toured the PBEC grounds with director, Margaret Leighton, and the executive vice president of real estate, Mark Stilwell.

Margaret is also the president of the benefiting equine organization, Redwings Horse Sanctuary, located in Lockwood, California. The group works to educate communities on equine suffering, puts together outreach programs, rescues horses that have suffered neglect and abuse, and eventually finds homes for the rehabilitated animals. Margaret joined the organization in 1991, has served on the Board of Directors since 2004, and was responsible for organizing and facilitating this event. After kicking off the presentation, Margaret introduced Linda Plumb, the Executive Director of Redwings, to speak about the group and some of the current programs.

John Blackburn followed Linda with an in depth look at the design philosophy outlined in his book. John was thrilled to raise approximately $540 for Redwings with the event’s sales of Healthy Stables by Design. The event saw attendance numbers between 40 and 50 people.

Scroll down to see photos from the event: 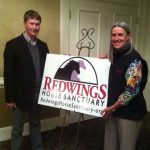 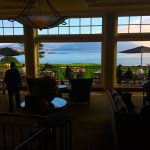 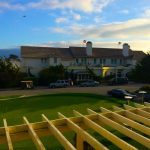