On November 9th, John Blackburn presented his book, Healthy Stables by Design, at the Steinbeck Country Equine Clinic, which sits between Monterey and Salinas, California. The clinic, owned by Dr. Tim Steinbeck, is a 24-hour full service referral veterinary hospital for horses.

Blackburn architect, Dan Blair, also attended the event with John, took the pictures below, and received a tour of the clinic. Blair was impressed by the facility and found it interesting that it is the only equine surgical facility in a 3-hour radius. Two of Dan’s photos below depict equine stones. These obstructions develop in the gastrointestinal tracts of horses overtime when minerals build up around a foreign object the horse has consumed. These enteroliths are made up of magnesium, phosphate, and ammonium and can be fatal if not removed. Of the stones shown below, one proved fatal and doctors at the Steinbeck Country Equine Clinic successfully removed the other.

The book signing followed a similar format to the previous stops on John’s tour. He presented many of the design concepts in the book in a power point presentation and took questions from the over 20 attendees of the event. John sold approximately 18 books raising $540 for the future Monterey Horse Park. 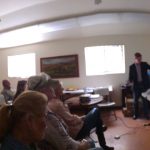 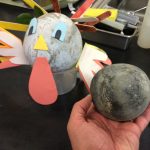